Many people joke that a kitchen remodel will destroy a marriage.

And hot damn has been trying to figure out what to do about countertops been hard.  We have a big space and want a big island.  Richard is against anything that he thinks looks cheap and we don’t have a lot of budget left.

We’d love to get a beautiful statement piece like this and cut it ourselves.

But apparently that type of DIY isn’t actually allowed because some poor soul got crushed by a marble slab once. 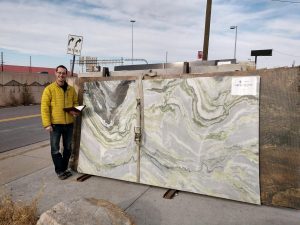