One of the things Richard and I agree most clearly on is: lots of windows.

I would say that at heart I am a desert child, growing up on the California/Nevada border with a love of big open blue skies and endless sunshine.  Though I lived in the Pacific Northwest for many years and appreciate the lushness and coziness that the wet weather provides, I struggled with the lack of endless sunlight and missed months of 90 degrees sunny days.

Richard loves the tiny houses that are mostly made out of windows.  I think he may agree to live in a greenhouse that was nothing but windows, if I suggested it.

Early after we began dating, he expressed his enthusiasm for tiny houses and I was skeptical.  After all, it’s a trendy thing to like for people despite most people’s inability to get rid of large toys, tons of old books, and closets full of clothes.  As we planned our first trip together, I wanted to both indulge and test Richard’s love of odd small spaces–so we ended up staying in a studio Earthship in Taos, New Mexico.  It was amazing!

It had lots of beautiful little finishes while being quite compact and we loved it.  One of the cleverest things about Earthships is how their intrinsic design passively regulates the temperature.  Half the house is buried in the earth, to keep the house cool, and the other side has two sets of big windows, forming a greenhouse to trap heat.

(Note: Many of the clever things about Earthships, like their water recycling, are difficult to integrate into standard building codes, despite being very functional.)

In addition to thoroughly enjoying geeking about thermodynamics, we were also impressed by how pretty the windows were.  When I asked the builder, he said they were replacement patio door windows– therefore designed to keep heat in and not to condense.  We can imagine having a whole wall of windows like this in our future lovenest. 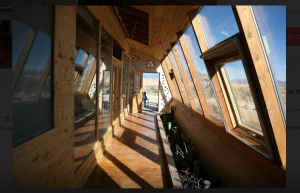 When Richard and I met, I lived in a sweet bohemian studio-ish apartment with a little nook surrounded on three sides with windows and just perfectly sized for my queen size bed.  It was a great place to lay in bed reading as the leaves changed colors, as the snow fell, or even when grumpily waking up after too little sleep. 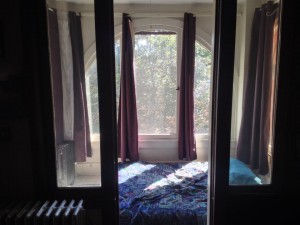 And while home builders in gentler climates may be able to piece together funky windows like this below, we have harsh storms, wind and snow at 8700ft to contend with.  We know we need something that will also keep us warm and cozy, without being half our budget.

We know so far that our house will be mostly South facing (south by southeast, perhaps?), and we know that we are lovers of lots of natural light.  We aren’t calling our designs for the lovenest a “tiny house” but are designing something with a small footprint that feels large because it opens up to these beautiful Colorado skies.  We know we can find a lot of great second hand windows at Re-Stores but that we have to design for harsh high country conditions.  And so for now, we’re thinking and looking and enjoying all sorts of inspiration.