I LOVE vent hoods! This is not an overstatement or hyperbole. There’s something amazing about a well-designed vent hood that effectively whisks away the smoke emanating from a perfectly crisping item in a pan, while fitting into the landscape of a home’s interior. Vent hoods are everything that good good design colliding with good engineering should be.

Vent hoods are awful! Have you ever actually used one that did its job? When the cheese in your quesadilla hits the hot pan and fills the house with smoke, did your vent hood actually remove the smoke before the detector went off resulting in every door and window of your house open on a blustery Colorado winter night? Of course it didn’t. Because vent hoods are awful. They shouldn’t be this way but they always are. Unless you want to spend $5,000 or more on a professional range hood, there pretty much useless.

So what are we going to do in our house?

The original idea was to put a pop-up vent hood directly next to our range top because we didn’t want a large hood coming down in the middle of our kitchen. This would destroy the elegant sight lines we’ve striven for in our design. Pop-up vents are a pretty cool idea. They’re closer to the source of smoke so they should suck it away before it dissipates into the air volume of your room. Standard hoods are so far away, unless they have a commercial fan, more than 50% of the smoke has already diffused before it gets in range of the sucking action. 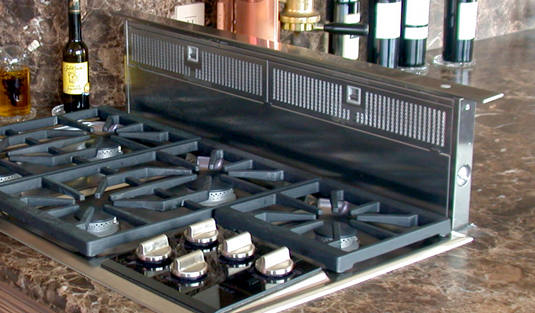 The downside to this type of vent is two-fold:

First, the vent usually is below the smoke source if you’re using a tall pan. This means it has to work extra hard to suck down the mass of hot smoke which wants only to rise to the sky.

Second, although it’s a slim and elegant device above the counter-top, it takes up a large volume below for the fan and vent pipe. We have limited storage space so I hesitate to give it up for something that may only be partially effective.

So our final answer to this quandary of ventilation? NO VENT HOOD. At all. That’s right, we are eschewing the vent hood in its entirety because its a total waste anyway! Instead, we are going to use the natural cross flow of our mini-split systems, the openeing-the-window trick, and finally a roof vent. At the very peak of our rook we will place a suction fan (similar to a bathroom vent fan) to remove the smoke once its reached the peak of our house.

Will it work? We think so and we’re willing to give it a try. Worst case, in year 2 we install a vent hood after all.