Previously we posted about the possibility of redrawing our property lines to maintain two having two properties but better orientated for setbacks. We have gone around and around on this idea but finally made a decision. We are merging our two 4-acre parcels into one large 8-acre parcel! This solves two big problems we’ve been having with house placement.

1. Current setbacks means we can’t put a full deck on the house.

We want a wrap-around deck but the east wall of our house is pinned against the setback line. This means we can’t put a deck on that part of the house. Additionally there’s a cost penalty because when you’re within a few feet of the setback, the county requires a surveyor to come out and verify we haven’t crossed the line. If we have, they will fine us (at least $1,000) or make us tear down the house (unlikely). Given some of the vagaries related to our actual survey, its possible that we could violate the setback without knowing it.

The topography where the house is currently located is steep. This means that the front of the house is at least 9 feet in the air. This has certain visual aspects we don’t love but also is a more expensive engineered system. The new location where we can shift the house to (about 20 feet away) takes us onto more gently-sloping land where we’ll only be about 3 feet in the air.

We decided to do this process before the year ends because currently its an administrative process that costs us nothing. In total it will take 3 months to complete the process but we can get building permits contingent upon the merge being granted. The county wants to limit the number of parcels in our area so its quite certain this will happen. If we delayed, it would be a new process the county is starting which would cost at least $100, and could take even longer to approve.

We lose the ability to build a second house on the other property – but its unlikely we would want to do that ourselves.

The value of the total property is increased as there are now few lots of this size. So potentially this aids in a sale later.

We get to save a grand ole’ tree that was previously too close to the house. Now it can shade us for many years – until it likely falls on the house in a huge storm. 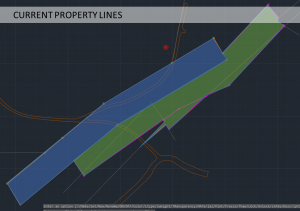 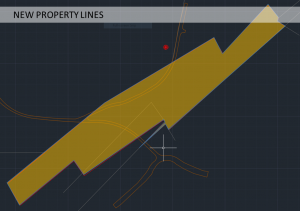